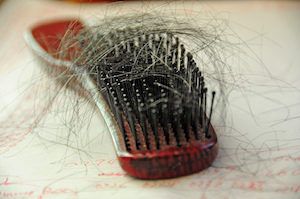 Age-related hair loss is the most common and frustrating types of hair loss which affects a staggering amount of people each year. Up until now, there’s been no real cure, with treatments focused on minimising the progression of the hair loss and covering it up.

However, things might be about to change as a group of scientists from the Netherlands believe they could have found a way to reverse age-related symptoms, including hair loss.

Could peptide therapy be the answer to age-related hair loss?

The potential cure is known as peptide therapy. It works by targeting damaged cells which aren’t useful to the body anymore. They’re still technically alive metabolically, but they’re basically just existing rather than providing a purpose.

Damaged cells increase as we age and this leads to all kinds of health problems. By targeting these cells, peptide therapy can reduce or in some cases, completely reverse the signs of ageing.

Currently, like many early-stage treatments, peptide therapy has only been tested on mice. So, it will need to undergo human trials to see just how effective it will be. However, the trials on mice have produced very promising results.

When treated with peptide therapy, mice which had lost their fur, regrew it completely, while it also improved kidney function and endurance. It took just ten days for fur regrowth to develop. Then it was within two weeks that endurance and fitness levels of the mice improved.

Which hair loss conditions could it treat?

Senescent alopecia is less common, but more is continuously being discovered about the condition. Rather than hair loss, it tends to result in more of an overall hair thinning. The most recent discovery was that the hair follicles transform into skin over time due to decreased levels of collagen. It’s thought peptide therapy could help patients avoid this process completely.

How long will it take for peptide therapy to be a viable solution?

As peptide therapy is only in the early stages of testing, it’s likely to be years before it can be manufactured into a hair loss product. So, while it is certainly an exciting development, there’s still a lot of work to be done to turn it into an effective, viable product.

In the meantime, there are a few excellent treatment options available for age-related hair loss. For early stage hair loss, topical treatments such as Minoxidil can really help.

Overall, peptide therapy could be the cure patients have been hoping for. While it may take a long time to bring it to the mainstream market, hope is still currently available in the form of numerous effective treatments.

http://www.drdavidfenton.com/wp-content/uploads/2017/07/David-Fenton-logo-revised.png 0 0 Clinic Team http://www.drdavidfenton.com/wp-content/uploads/2017/07/David-Fenton-logo-revised.png Clinic Team2017-05-20 07:59:552017-05-08 08:04:21Scientists Could Have Found Cure for Age-Related Hair Loss
New Figures Show Spike in Type 2 Diabetes Meaning a Rise in Related Conditions... Grey hair and baldness decoded
Scroll to top
We use cookies to ensure that we give you the best experience on our website. If you continue to use this site we will assume that you are happy with it.OK