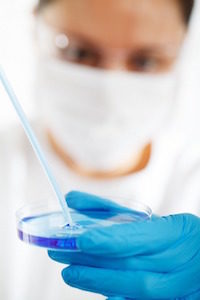 Hope for new potential treatments to tackle hair loss has been provided by Californian scientists. The team from the UC Irvine within the University of California, have discovered how the hairs on the body can communicate with one another.

Initially, it’s been assumed that hairs are solitary. However, the new hair loss research has revealed they instead appear to be controlled by a molecular mechanism. The mechanism changes based upon the location of the hair and is responsible for hair density and efficient hair growth throughout the body.

What the researchers discovered, was that when there’s damage or interruption to the molecular mechanism, it can have one of two effects. Either it can lead to patches of hair loss, or it can cause excessive hair growth.

Male pattern baldness is a classic example of potential molecular mechanism malfunction. According to the team, the hairs stop sending signals to one another, which results in the classic receding hairline and bald crown often experienced during male pattern baldness. The sides and back of the head can often be left with full, thick hair.

Now, the team are hoping that if they can figure out how to reactivate the communication between the balding and non-balding areas, regional baldness could be prevented. This could potentially be achieved via drugs. In particular, they believe focusing on regulating the channels of communication through the Wnt signalling pathways is the key to success.
Current drugs available to treat hair loss including Finasteride and Minoxidil, don’t interfere with Wnt signalling.

However, the Wnt signalling pathways have proven to be vital to the hair follicles stem cells in previous research.

Male pattern baldness is the most common type of hair loss experienced by men and there’s currently no real cure for the condition. There are treatments available, but none which could reverse the signs of balding like these proposed new drugs could.

There’s certainly the potential for this hair loss research to be turned into a future treatment. However, the next step is for the researchers to carry out more in-depth studies of how signalling factors can be exploited in order to encourage new hair growth. It is likely going to take many years before a drug could be developed and released onto the market.

Male pattern baldness is known to progress over time. Therefore, those who do have the condition now, should look into effective treatments already on the market. If you address androgenetic alopecia at an early stage, non-surgical treatment options could be an effective solution. However, these only work on hair follicles which are still functioning. Once hair growth has stopped completely, the only options available may be treatments such as a hair transplant.

Overall, the new research does provide an interesting look at the science behind hair growth and provides hope for a future cure. However, it’s unlikely a treatment will be developed for many years and those with existing male pattern baldness would be better seeking treatment as soon as possible to minimise the effects and slow down its progression.

http://www.drdavidfenton.com/wp-content/uploads/2017/07/David-Fenton-logo-revised.png 0 0 Clinic Team http://www.drdavidfenton.com/wp-content/uploads/2017/07/David-Fenton-logo-revised.png Clinic Team2017-09-11 18:49:112017-09-03 19:41:16The science of hair growth
How to spot the first signs of Female Pattern Hair Loss High levels of iron deficiency detected in young women
Scroll to top
We use cookies to ensure that we give you the best experience on our website. If you continue to use this site we will assume that you are happy with it.OK