Alopecia areata can be a devastating hair loss condition, as there is no known cure and some can experience episodes of hair loss throughout their life. This is why the greater the awareness about alopecia areata, the less chance of sufferers experiencing prejudice and misconception. Although alopecia areata is not a life-threatening condition it can be life changing.

September sees Alopecia Awareness month in the UK and events like the Alopecia Big Weekend that ran at the start of the month are a great way to raise awareness of the different hair loss conditions that people can suffer from.

As well as providing information on alopecia areata, sufferers leave with plenty of advice and support, as well as new friends. It’s the largest alopecia awareness event in the country, though there are other smaller events held throughout the year.

If you or your child is suffering from a hair loss condition, heading to an alopecia awareness event is highly recommended.

What is alopecia areata?

Alopecia areata is an autoimmune disease, where the body begins attacking its own cells; in this instance, the hair follicle cells. This leads to several bald patches and, in some cases, total baldness.

Many people assume if they are diagnosed with alopecia areata, they will lose all of their hair. However, it is important to note that the majority of cases only lead to patchy hair loss which can grow back with treatment. Only occasionally is the hair loss permanent.

The condition is thought to affect around 15 out of every 10,000 people in the UK and although alopecia areata can develop at any age it tends to be most common in teenagers and children. At least half of those who suffer from the condition, experience hair loss before they reach 21.

The importance of role models

Hair loss can be difficult enough for adults to comprehend, but for children it can be particularly distressing. Famous sufferers of alopecia areata go a long way to raise awareness of the condition. Children often look up to the people they see on the TV, so if they see fellow sufferers of the condition doing well and not being ashamed to speak about their struggle, it really does help.
Gail Porter was the first well-known celebrity to open up about her alopecia areata battle. In 2006 she took part in a documentary to try out various treatments for the condition. However, none of them worked and some actually made her feel a lot worse. The star continues to raise awareness of the condition and has been praised for her bravery throughout. 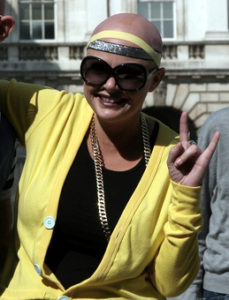 Gail Porter was the first well-known celebrity to open up about her alopecia areata battle. In 2006 she took part in a documentary to try out various treatments for the condition. However, none of them worked and some actually made her feel a lot worse. The star continues to raise awareness of the condition and has been praised for her bravery throughout.

Most recently, alopecia awareness ambassador Joanna Rowsell, has come into the spotlight after winning another gold medal in the cycling team pursuit event at the Rio Olympics. She claims she owes a lot of her success to the condition, after being diagnosed at just nine years of age.

While she mostly wears a wig, Joanna is happy and confident enough these days to be photographed without one. That wasn’t always the case and she admits growing up as a teenager with the condition was hard.

Gotham star, Anthony Carrigan, has also recently admitted his struggle with the condition. He’s opened up about how developing alopecia areata forced him to reassess who he was. After shaving his head, he felt liberated and serves as a great role model for children who might be worried about losing all of their hair.

It’s great to see so many celebrities speaking out about their experiences. It sends a positive message to children and teenagers dealing with the condition, that despite their struggles, they can achieve anything they want.