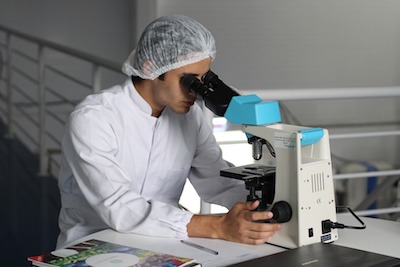 Here, we’ll look at the two companies currently battling to get their alopecia areata drug to the market and how they could change the lives of those suffering from the condition.

The latest company to reveal hair loss news at the American Academy of Dermatology 2019 Annual Meeting, is Pfizer. The pharmaceutical company produced results from its Phase 2a randomised clinical trial. Two potential Alopecia Areata treatment options stemmed from the company’s trial, including PF-06700841 and PF-06651600; both of which are JAK Inhibitors.

What’s exciting about these new drugs, is that they are designed to work with moderate, to the most severe forms of the condition such as Alopecia Totalis. The FDA has granted the drugs ‘Breakthrough Status’ and is monitoring the project. It shows that Pfizer may be the first company to introduce FDA approved JAK Inhibitor treatments onto the market.

In the company’s 24-week trial, volunteers were randomly assigned one of the three treatments, two of which being the new drugs, and one which was a placebo.

There were 142 patients involved in the trial, including males and females with moderate to severe Alopecia Areata. After four and six weeks, both of the drugs showed signs of regrowth. It was also discovered that patients who had suffered from the condition the longest, saw the slowest regrowth results. This means, the longer a patient has had the condition, the longer it will take to regrow the hair.

The results have so far been promising, and final results are due to be released within ten to 12 weeks.

Pfizer isn’t the only major pharmaceutical company to be working on an effective drug treatment. Concert Pharmaceuticals has been working alongside the American Academy of Dermatology (AAD) to develop the CTP-543 drug.

It has recently been revealed that its phase 2 trial was introducing new cohorts which would investigate increased doses of the drug. The findings from the trial are set to be revealed in December 2019. For now, its interim results have been presented at the Annual Meeting, looking into the effectiveness of 4mg and 8mg doses in comparison to placebo results.

Those who were given the 8mg dose twice each day showed significant hair regrowth. The researchers used the SALT (Severity of Alopecia Tool), to measure the participant’s shedding both before and after using the drug. It was revealed that 47% of those who had the 8mg dose, managed to reduce the SALT score by as much as 50%. So far, there have also been no negative side effects reported.

Both of these drugs currently being trialled have shown extremely positive results. So, it is now very much a race to see which company can get their drug into development.

http://www.drdavidfenton.com/wp-content/uploads/2017/07/David-Fenton-logo-revised.png 0 0 Clinic Team http://www.drdavidfenton.com/wp-content/uploads/2017/07/David-Fenton-logo-revised.png Clinic Team2019-04-16 18:57:412019-04-16 19:07:56Pharmaceutical companies race to bring alopecia areata drug to market
5 Common Hair Loss in Women Triggers New Assessment Tool for Female Hair Loss Conditions in Development
Scroll to top
We use cookies to ensure that we give you the best experience on our website. If you continue to use this site we will assume that you are happy with it.OK