New cool caps could prevent hair loss due to chemotherapy

A landmark trial carried out by the Texas-based San Antonio Breast Cancer Symposium has shown half of those treated with a cool cap during chemotherapy will not lose their hair. 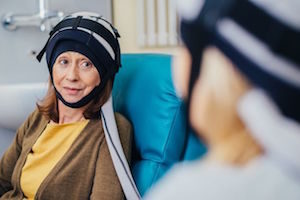 Cool caps have been widely studied as a potential hair loss prevention tool in recent years, though it’s only recently they have come close to being used as a viable option in the UK. This means millions of Brits undergoing chemotherapy could soon avoid the currently inevitable hair loss caused by the drug.

There were 182 women involved in the study, all with early-stage breast cancer. The cooling caps were worn for 30 minutes before chemotherapy began, throughout the session and then for 90 minutes’ post treatment.

Perhaps the most interesting and hopeful thing about this recent study was the fact it showed cooling caps can even be effective when used in the more aggressive, anthracycline-based chemotherapy sessions. A quarter of the women who wore the caps during this aggressive treatment managed to keep their hair.

Further good news has been provided by two large studies in early 2016 which quashed fears over the dangers of scalp cooling. Initially, it was feared that the use of cooling caps could increase the risk of cancer spreading up to the scalp. However, the studies carried out showed that the women who wore the cooling caps had no greater risk of the cancer spreading than those who didn’t.

How does it work?

Scalp cooling constricts the blood vessels, temporarily limiting circulation within the targeted area. During chemotherapy, this helps to prevent the hair follicles being exposed to too many toxins from the drug, therefore protecting them against damage which is what leads to hair loss.

Chemotherapy works by attacking and dividing the cancer cells rapidly. However, the drug doesn’t distinguish cancer cells from healthy cells so it therefore ends up destroying all cells within its path. As it reaches the hair cells, it divides them and that is what causes the alopecia.

The cooling caps are created with silicon and filled with small chambers which contain coolant liquid. They basically help the scalp to maintain a low temperature throughout the chemotherapy sessions.

Helping to save lives as well as hair

Many women surveyed, claim hair loss is the number one symptom of chemotherapy that they dread the most. In some cases, women have even requested a lower dose chemotherapy drug to avoid losing their hair, while others have refused treatment entirely because of it.

Overall, this most recent study is promising and moves cooling caps a step closer to being properly introduced as an effective hair loss prevention tool during chemotherapy.