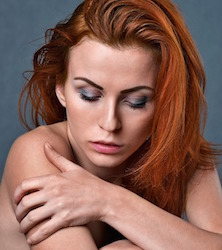 New American research suggests young women would benefit from having blood tests a few years after they begin their periods to check for iron deficiencies. Data from 6000 women aged 12 to 49, discovered anaemia tests are typically carried out sometime during a woman’s teen years in America. However, these don’t always detect iron deficiencies, which can lead to numerous health conditions, including hair loss.

In the UK, women are never given an anaemia blood test unless they specifically ask for one or show symptoms which could pinpoint the condition. This means many could have suffered from an iron deficiency for years before it is finally detected.

Although it is quite rare for iron deficiencies to be the lead cause of hair loss, it could be a possible cause of the condition. Therefore, as this new research suggests, tests in early adolescence could help to prevent, not just hair loss, but other unpleasant conditions brought on by iron deficiencies.

Although men can also suffer from iron deficiencies, it is mainly women who suffer. This is because each month during the menstrual cycle, a high level of iron is lost. Unless the diet is high in iron, this means over time, a deficiency will occur.

All of the participants in the study had taken part in a National Health and Nutrition Examination Survey from the years 2003 and 2010. It revealed 9% of young women aged 12-21 had an iron deficiency.

So, how exactly does an iron deficiency potentially contribute to hair loss?

When a person has an iron deficiency, the body stops producing as many red blood cells. These are required by the body to carry, as well as store, oxygen within the blood. However, it isn’t necessarily this which can lead to hair loss.

There are different types of anaemia and the one which can result in hair loss is triggered by a vitamin B12 deficiency. When an iron deficiency is left untreated, it can weaken the immune system and make it easier for the body to get sick. It can even lead to potentially serious health conditions such as tachycardia.

Unlike many other types of hair loss, anaemia-related hair loss results in more of an overall thinning, rather than noticeable patchy bald spots. The hair will also often become extremely dry and brittle, making it break easier.

The good news is, if your hair loss is triggered by anaemia, it is usually only a temporary problem. Once the condition has been treated, the hair will gradually start to grow back thicker and fuller.

Overall, iron deficiency can contribute to hair loss and it isn’t easy to diagnose. The most common blood test carried out which measures iron levels, is largely designed to test for anaemia. However, this test doesn’t necessarily detect iron deficiencies. There has been a blood test specifically designed to check the iron levels without looking for anaemia, but it’s pretty expensive. More certainly needs to be done to test and measure iron deficiencies in young women in order to prevent problems such as hair loss from occurring in the future.

http://www.drdavidfenton.com/wp-content/uploads/2017/07/David-Fenton-logo-revised.png 0 0 Clinic Team http://www.drdavidfenton.com/wp-content/uploads/2017/07/David-Fenton-logo-revised.png Clinic Team2017-09-23 19:56:382017-09-03 20:05:51High levels of iron deficiency detected in young women
The science of hair growth Next step towards a new, potential hair loss treatment?
Scroll to top
We use cookies to ensure that we give you the best experience on our website. If you continue to use this site we will assume that you are happy with it.OK