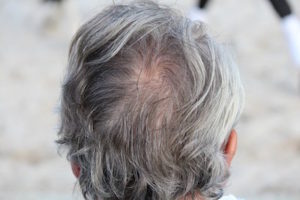 A potential cure for baldness and grey hair may have been found during a study into neurofibromatosis; a rare genetic type of cancer.

While trying to learn more about the rare condition, which causes tumours to grow on a patient’s nerves, scientists identified why it is the hair turns grey and the cell responsible for hair growth. Though it was very much an accidental discovery, it does provide hope for the development of future topical hair loss treatments.

What the baldness study revealed

The study was recently conducted by a group of scientists from the Harold C. Simmons Comprehensive Cancer Centre, situated within the University of Texas Southwestern.

They were researching into the stem cells contained within the hair follicles of engineered mice, to discover more about the rare Neurofibromatosis condition. It was then that they discovered a strain of mice they had engineered were starting to go prematurely grey.

The study revealed two critical things in terms of hair loss and greying. Firstly, in their investigation, they identified a KROX20 protein within the hair shaft, which is usually connected to nerve development. They removed the cells responsible for producing the protein, only to discover the mice started to go bald and did not grow hair at all.

Secondly, as the KROX20 protein was produced within the hair follicles, it also triggered the SCF (Stem Cell Factor) protein. When the team managed to silence this secondary protein, they saw that the hair of the mice started to turn white.

These discoveries have proven significant, though the team now plans to research further into how the proteins affect baldness and greying of the hair.

How might the results lead to a topical cure?

The discovery that SFC and KROX20 protein abnormalities can lead to hair loss and balding has given scientists a basis for a potential topical compound. The compound could be used to alter or trigger the proteins within the hair follicles in a way that could reverse or at least slow down greying and balding.

There is also the potential to produce a cure that would deliver specific genes to the affected hair particles, in turn correcting the problem.

So, the potential for a cure is certainly there, but it will require a lot more research before a suitable treatment can be developed.

There’s been a number of exciting developments made within hair loss research over the years.

Researchers in Japan discovered in 2012, that by using stem cells, they could reproduce viable hair follicles. The study once again involved mice, and it was found that the stem cells caused some mice which were previously bald, to grow a full set of fur. It took just five weeks for the hair to start growing through.

More recently, in February 2017, a staggering 280 genes were found to link to male pattern baldness. This not only helped researchers identify who was more likely to go bald, but it also helped to identify potential drug treatments which could be used as a cure for this common condition in the future.

It appears that with each passing year, we become closer to a potential cure for hair loss. While there may not be a solution for all cases of male pattern baldness just yet, there are plenty of excellent treatment options available that can be worth exploring.

http://www.drdavidfenton.com/wp-content/uploads/2017/07/David-Fenton-logo-revised.png 0 0 Clinic Team http://www.drdavidfenton.com/wp-content/uploads/2017/07/David-Fenton-logo-revised.png Clinic Team2017-07-05 21:48:472017-07-05 21:48:47Grey hair and baldness decoded
Scientists Could Have Found Cure for Age-Related Hair Loss Women’s hair loss under the spotlight
Scroll to top
We use cookies to ensure that we give you the best experience on our website. If you continue to use this site we will assume that you are happy with it.OK