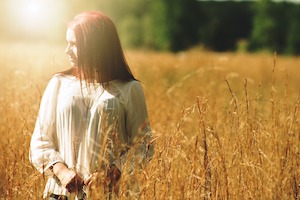 Researchers in China and the USA have recently discovered that gluten may be able to heal damaged hair. Working together, the researchers were looking to discover a protein which could bind to the hair, helping to repair it. After following on from previous research, it was discovered gluten could be the key to healthy locks.

Below, we’ll look at the research which was carried out and whether gluten could be the answer to your hair loss worries.

What did the hair loss research reveal?

Ultimately, the research revealed that adding wheat gluten into shampoo can help restore the bond of the hair, making it less brittle. Both teams experimented with wheat gluten in various ways and published their results within the Royal Society Open Science journal.

After soaking the gluten into an enzyme, the protein broke down into the base peptides. A chemical formula known as EDDAC, was then added to increase the isoelectric point of these peptides which in turn matched those of the hair. They finalised the method by mixing the solution into a shampoo and using it on samples of hair.

Once the solution had been used on the hair, it was discovered that it helped to reduce friction in dry hair by 21% and 50% friction in wet hair.

So, could gluten shampoo be the answer to your hair loss worries?

While this new research does prove wheat gluten shampoo could work to repair brittle hair, it isn’t going to help reverse or treat hair loss. It could be used to treat temporary mild forms of hair loss such as traction alopecia where the hair has become brittle or be an important aid in strengthening hair regrowth after a temporary bout of hair loss. Patients suffering from permanent hair loss would require a different form of treatment.

http://www.drdavidfenton.com/wp-content/uploads/2017/07/David-Fenton-logo-revised.png 0 0 Clinic Team http://www.drdavidfenton.com/wp-content/uploads/2017/07/David-Fenton-logo-revised.png Clinic Team2018-03-22 11:45:592018-03-11 11:49:43Gluten found to heal damaged hair
The problem with hair loss ‘cures’ in the media New Trial for Possible Hair Loss Cure
Scroll to top
We use cookies to ensure that we give you the best experience on our website. If you continue to use this site we will assume that you are happy with it.OK