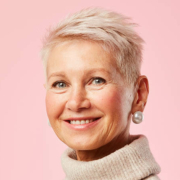 According to a new study, women with Frontal Fibrosing Alopecia are more likely to suffer autoimmune disease as well as thyroid abnormalities. The results, published within the British Journal of Dermatology, provide specialists with a better idea of how to approach patient treatment.

Here, we’ll look at what the study revealed, as well delve deeper into what Frontal Fibrosing Alopecia is.

Phenotypic data was included from a total of 711 women in this latest study. Participants were of Eurasian ancestry, had an average age of 66 and had been diagnosed with Frontal Fibrosing Alopecia.

The average duration of hair loss on the scalp was seven years. Around 73.2% of the women had experienced frontotemporal hairline recession after the menopause. A slightly higher 77.3% had perifollicular erythema and 26% experienced hyperkeratosis. Additionally, 90.6% of participants had suffered eyebrow loss and 44.5% experienced eyelash loss.

What is Frontal Fibrosing Alopecia?

Frontal Fibrosing Alopecia (FFP) affects the front of the hairline in women. Usually, the condition comes on suddenly, although it can progress gradually in some patients.

When diagnosing the condition, hair loss in the eyebrows is a tell-tale sign. As the condition progresses, it isn’t uncommon to experience hair loss on the limbs of the body, as well as pubic hair loss.

How is FFP treated?

Patients who are diagnosed with FFP have limited treatment options. If the follicles of the hair have been damaged, the hair isn’t going to grow back.

Initially, oral corticosteroids tend to be prescribed to slow down the progression of the condition. Other drugs that have helped to slow FFP include Hydroxychloroquine and Finasteride. However, these are short term treatments that generally aren’t safe for long-term use.

Treatments tend to focus on stabilising the condition, rather than eliminating it completely. It is also important to ensure you receive an FFP diagnosis. There are lots of different types of hair loss and each requires a different treatment.

Overall, the latest research linking FFP to autoimmune conditions is useful for patients and specialists. Seeking treatment for autoimmune issues could prevent FFP from both developing and progressing. If you suspect you are suffering with FFP, book a consultation with a hair loss expert to identify the best course of treatment currently available.

Scroll to top
We use cookies to ensure that we give you the best experience on our website. If you continue to use this site we will assume that you are happy with it.OK