A group of South Korean scientists claim to have discovered a cure for hair loss. Not only could this new cure prevent baldness, but it could also potentially be used to regrow the hair.

The discovery came when the team identified a protein responsible for hair growth. They then developed a completely new substance which could control how this protein functioned; encouraging hair regeneration. 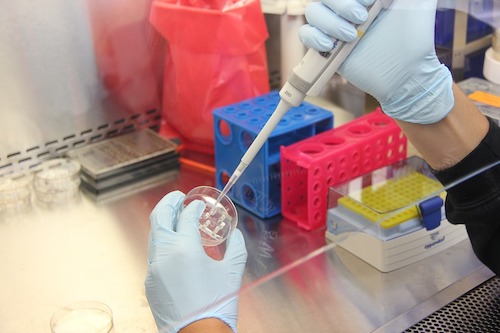 The exciting discovery was made by South Korean scientists at the Choi Kang-yeol of Yonsei University. The results of the hair loss study have been published within the Journal of Investigative Dermatology.

The first thing the study revealed, was the link between the CXXC5 protein, and a different protein referred to as ‘Dishevelled’. It was discovered that when the two proteins bound together, it led to a restriction in wound regeneration and hair growth. This discovery led the team to focus on ways they could stop the CXXC5 protein from binding to the Dishevelled protein.

The team developed a biochemical agent, named PTD-DMB, which could prevent the two proteins binding together. After testing it on mice, they discovered by blocking the proteins from binding, the mice didn’t lose any hair. However, more surprisingly was the fact bald mice used in the trial, began to grow back the hair which had been lost.

The PTD-DMB peptide, was applied to the bald mice’s skin, over a period of 28 days. The researchers also added valproic acid in one group of mice. Both groups showed hair regrowth.

The addition of valproic acid is actually quite significant. Usually used in the treatment of migraines, seizures and bipolar disorder, in the study it was used to disrupt the Wnt/β-catenin pathway. In turn, this promoted new hair follicle development.

The results of the study are certainly promising, but experts are warning against getting too excited about this potential cure.

Why shouldn’t we get too excited?

Although the new biochemical agent has proven to be effective in mice, there is still a long way to go before it could be developed into an actual human cure for hair loss. Human trials will need to be conducted, but before that researchers will also need to determine whether the agent could be potentially toxic.

The scientists hope the biochemical agent can be used in new drugs to treat both hair loss and skin tissue damage. However, until human trials are conducted there is no telling how it will react within the human body.

For now, those suffering from hair loss do have a surprising number of treatment options available. From laser treatments to hair transplants and even medications; there are plenty of successful treatments to match varying types of hair loss. If this discovery does lead to a cure, it is unlikely to be available for many years. Therefore, seeking treatment now, rather than waiting for a cure to become available, is highly recommended.

http://www.drdavidfenton.com/wp-content/uploads/2017/07/David-Fenton-logo-revised.png 0 0 Clinic Team http://www.drdavidfenton.com/wp-content/uploads/2017/07/David-Fenton-logo-revised.png Clinic Team2018-01-12 16:57:252018-01-05 17:07:10A biochemical breakthrough in the hair loss battle
New Research Suggests Over 45% of Women Will Notice Hair Thinning Hair loss in black women linked to uterine fibroids
Scroll to top
We use cookies to ensure that we give you the best experience on our website. If you continue to use this site we will assume that you are happy with it.OK